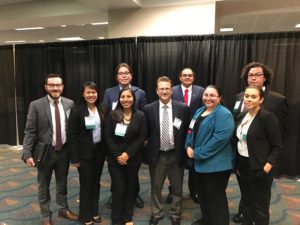 Eight Pre-Law Summer Institute (PLSI) students attended the American Bar Association’s (ABA) Judicial Clerkship Program (JCP) sponsored by the ABA Council for Racial and Ethnic Diversity in the Educational Pipeline and the ABA Judicial Division. The program took place at the ABA’s Mid-Year Meeting in early February in Miami, Florida. While this is PLSI’s fourth time participating in the program, it is perhaps the most meaningful because eight PLSI students were able to attend, and three former PLSI JCP participants are now in federal and state judicial clerkships around the United States.

The ABA established the JCP to encourage a more diverse group of attorneys to apply for these clerkship positions, on the heels of their study that found there were relatively few minority clerks. Heidi Nesbitt, the PLSI Director and American Indian Law Center, Inc. (AILC) Assistant Director, explained the importance of exposing American Indian and Alaska Native law students to judicial clerkships: “We sought admission into this program because currently there are only two Native Americans serving as federal judges, Federal District Court Judge Diane Humetewa and Federal Magistrate Judge Leo Brisbois, and fewer than two dozen Native state judges. Since clerking for a judge after law school is one of the best paths to a judicial appointment, we elected this avenue to help increase that number.”

When asked about the 3-day program that included a Q&A session with a panel of judges and clerks, and a research and writing project, Nadine Padilla reflected that “The judges I worked with were very approachable and supportive and gave me a lot of great advice. I especially liked hearing the judges talk about the challenges they experienced in law school and in becoming judges, and how they overcame those challenges. It was very motivating to get back to school and work hard.”

Joab Maestas was inspired that “some judges openly discussed biases and said that clerks can play an important role for the Court to avoid such biases in the judicial process. I also learned that judges truly care about the personalities and interests of their clerks. Who would have thought that was important in applying for a clerkship?” Maestas went on to say that he is definitely going to apply for a judicial clerkship because “he enjoyed the collaboration process of problem-solving with a judge,” and he wants to use these skills to be an effective advocate in Indian Country.

PLSI is proud to announce that three former PLSI/JCP participants are presently in judicial clerkship positions:
Kathryn Jones, PLSI 2013, Cherokee Nation of Oklahoma, clerking for the Hon. Carlos F. Lucero of the United States Court of Appeals for the Tenth Circuit.

In addition to collaborating with the ABA JCP, our program is also providing information on judicial clerkships during the PLSI summer, before the students attend law school. The program invites PLSI alumni who have clerked to share their experiences and how the clerkship influenced their careers. Kathryn (Katie) Jones, who is presently clerking on the Tenth Circuit, remembers, “the PLSI Clerkship Panel introduced me to what a valuable experience a judicial clerkship can be. I am grateful that PLSI provided this exposure early, because as I soon learned, the work involved in qualifying for a judicial clerkship begins right at the start of law school!” Jones says that she is “learning about law from the inside” and is witnessing “firsthand how judges weigh both sides of a case and what goes into a decision.”

Helen B. Padilla, Director of the AILC, attended the JCP with the PLSI students in Miami and found that “the JCP judges provide the right information and feedback to help each student understand what it takes to be a clerk. We look forward to these efforts leading to a more diverse federal and state judiciary.”

We're not around right now. But you can send us an email and we'll get back to you, asap.