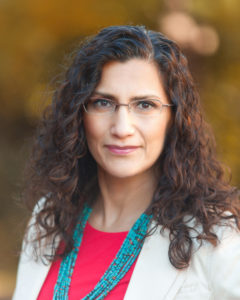 Rodina Cave Parnall is coming full circle by joining the American Indian Law Center, Inc. (AILC) as Assistant Director of the Pre-Law Summer Institute for American Indians & Alaska Natives (PLSI). Cave Parnall attended the intensive 8-week PLSI program in 1998, tutored in 1999, taught the Indian Law course in 2011 and 2016, and has been involved in the new PLSI Judicial Clerkship Program. She is Quechua (Peruvian Indian).

Cave Parnall recently returned to New Mexico from Washington, D.C. where she served, by Presidential appointment, as Senior Policy Advisor to the Assistant Secretary Indian Affairs. Before that, she practiced law in New Mexico and Arizona, primarily representing tribes and tribal entities. In addition to her Indian law practice, she is experienced in complex federal and state litigation and appeals.

“From my first contact with the AILC as a pre-law student in 1998, I wanted to be a part of this long-standing Indian-driven legal and public policy organization,” said Cave Parnall. “I am honored to put my skills and experience to work in this new capacity as Assistant PLSI Director.”

Helen B. Padilla, AILC Director, said “Rodina brings her dedication to the development of Indian law students and lawyers and a history of academic and professional excellence. Her experience with tribes and tribal leaders, and success in the development and implementation of federal Indian policies make her a perfect match for the position. Her skills and commitment will support and advance the mission of the Law Center and the PLSI.”

Heidi Nesbitt, PLSI Director and AILC Assistant Director, said, “I am so excited that Rodina has joined us and will be taking over as the PLSI Director when I retire next year! She has an amazing ability to connect with and encourage students, always drawing out the best in them. Her background in education and policy will be an outstanding addition to the program, and I know she will continue to move the program forward in the ever- changing world of legal education.”

Cave Parnall is an adjunct professor at the UNM School of Law, received the 2014 New Mexico State Bar Indian Law Section Outstanding Achievement Award, and is an Associate Judge on the Southwest Intertribal Court of Appeals (SWITCA). She graduated in 2001 from the ASU College of Law with a Certificate in Indian Law and the Outstanding Law Graduate Award. She holds a B.B.A. and M.Ed. from the University of Massachusetts Amherst. She clerked for the Honorable William C. Canby, Jr. with the U.S. Court of Appeals for the Ninth Circuit.

We're not around right now. But you can send us an email and we'll get back to you, asap.